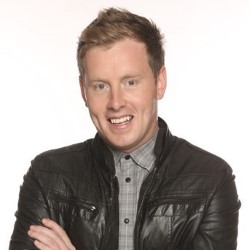 Irishman Andrew Ryan is 32 years old and could not be happier, or could he? Everyone around him is getting married and buying houses. In his new show The Life of Ryan, the Corkman explores the direction in which his life has gone and his frustrations along the way. Andrew's quintessentially Irish storytelling abilities and cheeky, friendly demeanour make him a natural observational stand up. Follow up to his debut show Ryanopoly. 'Illuminating debut' **** (Metro). 'Ferociously intelligent, charming, hilarious and accessible with some really powerful thinking underneath it all' ***** (Skinny).

Irishman Andrew Ryan returns to Edinburgh this summer with his quintessentially Irish storytelling, friendly demeanour and cheekiness in toll. Andrew will be performing his highly anticipated follow up show, The Life Of Ryan, to audiences nightly at the Gilded Balloon, The Wee Room, at 8pm throughout the festival.

He is 32 years old and couldn't be happier or could he? Everyone around him is getting married and buying houses. In his latest offering, The Life Of Ryan the Corkman explores the direction in which his life has gone and his frustrations along the way.

This natural observational stand up made his comedy circuit debut in 2008 when he spontaneously entered an open mic contest. Fast-forward to 2014 and he is now one of the most exciting talents to hit the circuit in recent years; in demand as an act and an MC at the biggest comedy clubs across Ireland and the UK.

He has supported both Justin Moorhouse and Terry Alderton on their UK tours and performed his critically acclaimed debut hour show Ryanopoly at the Edinburgh Fringe Festival in 2012.

He has performed stand-up on BBC Three's Russell Howard's Good News. He has appeared as a guest on Sky Sunrise and as a regular panelist on BBC Radio, and is soon to appear on Comedy Central at The Comedy Store. In 2014 his YouTube hit for TalkSport, 'Chelsea Fans Claim To Know About Players That Don't Exist', attracted more than 1 million views.