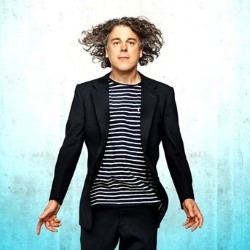 Much lauded as resident dunderhead on QI or the charming but reticent crime solver Jonathan Creek, Davies virtuosic story-telling and whip-smart funny bones combine to make this a show not to be missed. 'One of the best Stand-up comics out there' (Guardian). Age recommendation 15+.

Following the phenomenal success of his Spring tour earlier this year and prior to an Autumn tour, Alan Davies is proud to announce that he will be bringing his brand new show, Little Victories, to the Edinburgh Festival Fringe this year for four nights only.

Alan Davies - probably best known as the much-loved resident dunderhead on QI or the star of iconic television series Jonathan Creek - began his career in stand-up comedy in 1988 and was runner-up in the City Limits New Act of the Year contest 1989. He was named Time Out Best Young Comic in 1991 and made his network television debut on Tonight with Jonathan Ross in 1992. In 1993 two appearances on C4's Viva Cabaret led to a nomination for a British Comedy Award as Best Newcomer.

In 1994 he won an Edinburgh Festival Critics Award for Comedy and a Perrier Award Nomination and the show was released on VHS as Live At The Lyric. The following year he appeared at the Montreal, Melbourne and Auckland Comedy Festivals and was nominated for a British Comedy Award as Best Stand-Up Comedian.

Jonathan Creek, written by David Renwick continues to attract huge audiences and has won numerous awards, including a BAFTA for Best Drama and a National TV Award.

In 2002, he starred in Auntie and Me by Morris Panych for another sell-out season at Edinburgh before transferring to the Wyndham's Theatre for a four month West End run. That same year Alan took part in a comedy pilot hosted by Stephen Fry. QI has subsequently run every year since 2003.

The lead role in two series of the ITV legal drama, The Brief, followed, and in 2009 Penguin published his first book, My Favourite People 1978-1988 which was adapted into a three part documentary series for Channel 4 called Teenage Revolution (also the title for the paperback).

In 2010 he took the lead role of chef Roland White in the BBC2 sitcom Whites and in 2011 Alan co-wrote and starred in a short film for Sky One as part of their Little Crackers Christmas season before returning to Australia for a successful tour of QI Live followed by a sell-out tour of his new stand-up show, Life Is Pain.