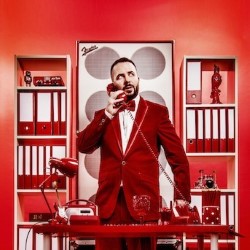 Now officially one of the Fringe's favourite and most popular acts, Abandoman return with more free-styled musical comedy genius and an even bigger show than ever before. Involving a broader scope of musical influences, a live interactive cinema screen and topped off with live dancers, the E4 Udderbelly this August will never be the same again!

Following the out-of-this-world highs of last year's Moonrock Boombox, Abandoman have hit the ground with a thud. They're back in the office...and trying desperately to escape. Using their trademark blend of audience interaction and razor-sharp improvisation, watch as they weave stories and hit songs from the characters in the crowd. Who will be chosen to fill the role of the office temp? Who will join them onstage as an assistant? And who is going to take the minutes? With the show relying entirely on audience suggestion, absolutely nothing is planned and anything can happen. Find yourself captivated as Abandoman take you on a magical journey, all with one mission: to escape the humdrum of the 9-to-5.

Currently unparalleled by any other show at the Fringe, Ireland's top comedy hip hop improv team swiftly adlibbed their way from the smaller capacity Fringe spaces to what has become one of the major festival venues in three years. The Australia comedy festivals were soon to follow suit and, in February 2012, their debut performance there won them a Best Comedy nomination, for which they were nominated again this year, and a Best Newcomer award at the Adelaide Fringe Festival. Every summer you will be able to see them storming the UK festivals from Bestival to Latitude, Rockness, Glastonbury, Hop Farm and V Festival.