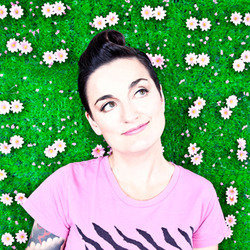 No Latecomers. Under 14's should be accompanied by an over 16yr old.

A mixture of silliness, satire and caustic one liners from one of the UK's favourite comedians. She won't change the world but she will ask the big questions such as dog prams: why? As seen on BBC1's Michael McIntyre's Comedy Roadshow, BBC2's Mock the Week, Dave's One Night Stand and Channel 5's The Wright Stuff. 'Always fizzing with indignation and throwing out a hugely enjoyable mix of brutal putdowns and richly funny stories, Lyons has what it takes to delight any crowd' (Guardian). 'Achingly funny ... A cracking show' (Age, Melbourne).

Critically acclaimed comedian Zoe Lyons returns to this year's Edinburgh Fringe Festival with Pop Up Comic. The show is an energy packed, combination of the silly, physical and the satirical. Zoe has taken a long hard look at the big issues of the day, binned them and focused her attention instead on some really important stuff. Why are there so many one-footed pigeons and motion sensitive air fresheners in the world? At a time when comedians are falling over themselves to get on telly Zoe has a few cautionary tales. Ever wondered what it is like to be the thickest contestant on University Challenge or what it feels like to be upstaged by a disabled dog on daytime TV? Zoe does and she isn't too proud to share.

Pop Up Comic is her fifth solo show after 2011's Clownbusting. Other solo shows are 2010's Miss Machismo, 2008's Mangled Mantra Of The Mixed Up Modern Mind (which gained her a win for Funniest Joke of the Fringe voted by Dave TV) and her debut solo show Fight Or Flight that procured her an If.Comedy Best Newcomer nomination. Germaine Greer was quoted in the Guardian describing the gag as "Astonishingly vicious" - Zoe takes this as a massive compliment!

Zoe's television credits include Don't sit in the Front Row (Sky Atlantic) and regularly appears on Mock The Week (BBC Two) and The Wright Stuff (Channel Five). She also recently appeared on The Alan Titchmarsh Show (ITV1) in a discussion about tattoos. Other TV appearances have included Michael McIntyre's Comedy Roadshow (BBC One), Celebrity Pointless (BBC One), University Challenge: The Graduates (BBC Two), Sex Bombs (BBC One & BBC Two) and Most Embarrassing Couples (BBC Three) amongst others. Radio wise Zoe has been heard in Clive Anderson's Chatroom (Radio Two) and 4 Stands Up (BBC Radio 4), The Vote Now Show (BBC Radio 4). She has also appeared in It's that Jo Caulfield Again (BBC Radio 4) and PMQ with Andy Parsons (BBC Radio 5 Live).