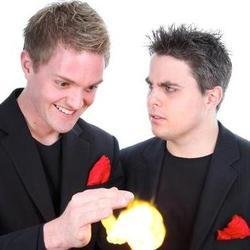 The bickering illusionists Young & Strange were at the top of their game in 2011: TV appearances, money, girls and takeaway pizzas every night. In 2012 an accident during a live show ended their careers. Can they return to the Fringe this August to regain their glory days? Will there be enough cash in the bucket at the end of the show to allow them to order a stuffed crust pizza? Featuring spectacular stage illusions and comedy. Proudly presented by PBH's Free Fringe, entry to this show is free.