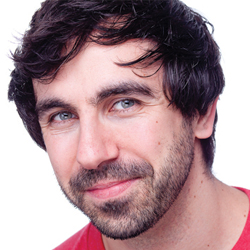 After a season of free shows about aiming high (www.edfringe.com/whats-on/comedy/yianni-in-think-big), can a high quality, but unknown comedian sell-out Edinburgh's largest venue? Buy a ticket, let's find out! Nominated - Amused Moose Laughter Award 2012 'Stunningly Good' **** (Scotsman 'Sharp social commentary to compare favorably with Woody Allen' **** (Chortle). 'The next big thing' **** (Three Weeks). 'Wonderfully funny' **** (Time Out). 'Exceptionally original ... excellent storytelling' **** (Fringeguru). 'Everything that a good show should be' **** (Skinny). 'Yianni feels like something new and refreshing in a world where so much can be the same' **** (Gigglebeats).

Jimmy Carr. Jason Manford. Yianni? On the 25th August Yianni, whose TV profile consists of an appearance on The World Stands Up eight years ago and once being visible on Match of the Day, will perform in the 1200 seat main auditorium of the Edinburgh International Conference Centre.

After a successful Edinburgh in 2012 in a room holding 80 people, Yianni wanted to write a show that began on the edge of his comfort zone and worked outwards. From this sprung forth Think Big, a month long run of shows at the Free Fringe about the power of self-belief; promoting and leading up to the finale, a one off BIG Show at Edinburgh's biggest venue.

50p from each ticket sold to the Big Show will go to mental health charity Mind and 50p to the Free Fringe.

Yianni looks at self-belief, persistence and big thinking; what can and c*n't (apologies) be done; what his limiting beliefs and fears are; where they came from and the scale of what is possible when he changes those beliefs); whilst trying not to become a wanker. All with a trademark blend of irreverence, stories, invented and 'obserquations' (Observational Equations).