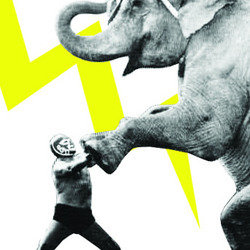 It's back! Comedians. Wrestlers. Blood. The Foster's Edinburgh Comedy Award-winning megashow, Chortle's #1 event of 2011, invades the Pleasance Grand for one night only, in a death-defying clash between good and evil. Old scores must be settled. New blood will be spilled. Tables may be treated irresponsibly. Take a deep breath and prepare yourself: actual, massive wrestlers, battling Edinburgh's best comedians, in an actual wrestling ring. 2011's chair-swinging, ankle-breaking, sell-out spectacular just got even better. Booking essential. 'Genius' ***** (List). 'Genius' (Times). 'A truly awesome event' ***** (Chortle.co.uk).

This August the worlds of comedy and wrestling will once again collide as Foster's Edinburgh Comedy Award winning sell-out spectacular The Wrestling returns to the Pleasance Grand for one night only. Stand-ups will be slammed-down and punchlines will meet clotheslines as world-class comedy talent grapple with terrifying wrestlers live at the Edinburgh Fringe.

The Wrestling is the creation of Barry Award-nominated sketch duo Max and Ivan. When he was 15, Max Olesker was the youngest professional wrestler in the UK - the high-flying 'Max Voltage' - and two years ago he and his partner in crime Ivan Gonzalez set-up the most talked about event of the Edinburgh Fringe 2011 as The Wrestling was born in front of a sell-out 800 strong crowd at The Pleasance.

The night pitted Good Vs Evil. Stellar comedy talent put to one side their personal safety. Heckled from the side by a commentary team of Brendon Burns and Andrew Maxwell, with MC-ing duties handled by the inimitable Nick Helm, the likes of Edinburgh Comedy Award winners Russell Kane, Adam Riches and Friday Night Dinner and Plebs star Tom Rosenthal climbed into the ring and into battle with enormous professional wrestlers with names such as PAC 'The Man That Gravity Forgot', 'The Star Attraction' Mark Haskins and Dan 'The Hammer' Head. Managers including Rich Fulcher and Mark Watson offered pep talks, whilst Pappy's' Matthew Crosby was the roving reporter getting all the behind-the-scenes gossip.

The event secured the Foster's Edinburgh Comedy Awards Panel Prize and was named Chortle's Best Show of 2011, going on to be nominated for the Innovation Award at the Chortle Awards 2011 - achievements that more than made up for the broken ankle Max sustained during the event, by somersaulting fifteen feet onto the floor.

And now The Wrestling II returns. Once again Helm, Burns and Maxwell are set to guide us through a night of epic conflict. Stepping back into the ring, Tom 'Explosenthal' Rosenthal will do battle in the first ever Comedian vs Wrestler one on one grudge match, against Dan 'The Hammer' Head. Joining him will be an all-new roster of fighting comedians, risking life and limb and including some of the biggest names around in what will undoubtedly be the event of the Fringe 2013.

As well as masterminding The Wrestling, award-winning duo Max and Ivan bring their brand new show, Max and Ivan: The Reunion, to the Pleasance Queen Dome on the back of a sell-out run at the Melbourne International Comedy Festival and a nomination for Most Outstanding Show in the prestigious Barry Awards. They have enjoyed two sell out, critically acclaimed runs at the Edinburgh Fringe, and transferred to London's West End for sell out runs at the Leicester Square Theatre and Soho Theatre. Their credits include Badults (BBC Three) and Sketchorama (BBC Radio 4), and they have written and starred in a series of sketches for BBC Comedy Online.