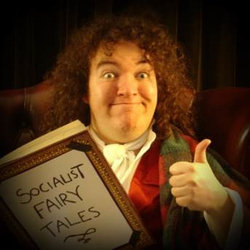 Storytelling starring Will Seaward performed on the following days in August 2013...

Socialism was invented in 1848. Lovely stories about wizards and princesses were invented in olden times. The forces of capitalism have kept them apart ... until now! From the exciting mind of Bouncy Castle Hamlet creator and internet mad scientist Will Seaward: 'Genius' (Metro), 'I could watch him all day' (ThreeWeeks) - comes this slice of lefty bedtime story fun which will wrest the fairy tale from the icy claws of the free market once and for all! Huzzah! Hammers! Sickles! Goblins! Che Guevara! What could possibly be better?

Socialism was invented in 1848. Lovely bedtime stories about witches and giants were invented in Olden Times. The evil forces of capitalism have kept them apart...until now. Bouncy Castle Hamlet creator Will Seaward's first Edinburgh solo show will set out to wrest the Fairytale from the icy claws of the free market once and for all! Comedy! Storytelling! Wizards! Magic! Princesses! Che Guevara! Red things! What could possibly be better?

Will Seaward is the creator of Edinburgh smash-hit Bouncy Castle Hamlet (Guardian Top 10 Things to See at the Fringe 2006, "triumphant success" Guardian, "brilliant...genius" Metro). Will was the North of England Winner of the Amused Moose Laugh Off 2012 and a Finalist for the Golden Jester Award 2012, and is currently starring as an eccentric scientist in a series of splendid online ads for Confused.com. This will be his first solo Edinburgh show.