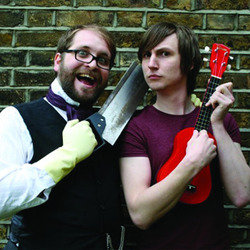 John Hunter (1728-1793), a revolutionary Scottish surgeon whose discoveries last to this day, also had a darker side linking him to a spate of grave robbings. Add to that his botched attempts at cryogenics, self-immunisation and an overfamiliarity with the star of a Georgian freak show, and you have one comedy legend. Follow Musical Comedy Awards 2013 nominees We Are Goose into the macabre world of Enlightenment surgery, as they tell you the story of their hero through an arsenal of witty songs which reference blues, doo-wop, klezmer and everything in between. ***** (BroadwayBaby.com).

Will You Hold My Hand? is the new show from musical comedy rising stars We Are Goose - wordsmith Timothy Goose and guitarist Richard Hughes, who sing funny songs about a range of subjects.

Will You Hold My Hand? is about We Are Goose's comedy hero, Scottish surgeon and anatomist John Hunter (1728-1793), the revolutionary scientist who brought major advances in the studies of human teeth, digestion, gunshot wounds and venereal diseases, which have had a lasting impact on modern medicine.

Less well known however, is Hunter's darker side: despite being the leading doctor of his day as Royal Surgeon to George III, his ethically dubious approach raised eyebrows then as now - think graverobbings and murders. Add to that his bouts of wild experimentation, botched attempts at cryogenics and transplantation, an obsessive love of animals, a self-innoculation that went horribly wrong and an over-familiarity with the star of a travelling freak show... and you have one comedy legend.

Give We Are Goose an hour to tell you the 100% true story of John Hunter through a range of witty songs which pastiche a multitude of styles, from blues, doo-wap and klezmer, to 'a rapid animal rap that really has to be seen' (***** Five Stars, Broadway Baby). Think Flight of the Conchords crossed with a Royal Institution Christmas Lecture - it's a Horrible Histories for adults!