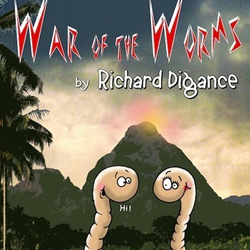 The best-selling children's author and singer Richard Digance takes to the stage...'this is a story that needs lots of noises from everyone. It's a grimy, slimy, mucky, yucky story so we need mucky, yucky noise, lots of ooo's while you all hold your noses'. The Slime Age took place on earth many years before the arrival of bad-tempered dinosaurs. A time when only helpless, little worms lived on our planet. Find out what happens in this interactive children's musical full of gooey, gungy fun telling the story of the War of the Worms.