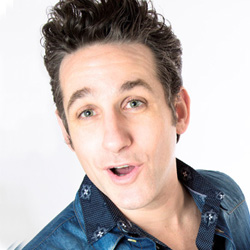 Canadian superstar Tom Stade is back by popular demand after last year's sell-out show Tom Stade Totally Rocks! Currently on an extensive sell-out UK tour, Tom will be performing for just 12 nights only at the Assembly Room's Ballroom in August.

The Essential Tom Stade, will see Tom strutting his greatest stuff, ahead of his eagerly awaited DVD release later this year. Raw, bold stand-up at it's very best; it's the very last chance to catch Tom performing all his classic signature routines live; something old, something new, nothing borrowed, very blue. First class storytelling, irrepressible charm and magnetic stage presence courtesy of one of the most exciting and sought-after performers in the country.

Tom has been seen on many high profile TV shows these include BBC One's Live At The Apollo, Michael McIntyre's Comedy Roadshow, Lee Mack's All Star Cast, Channel 4's Stand Up For The Week and Dave's One Night Stand. Tom has built up a huge cult following after performing on several extensive UK headline tours.

He has headlined everywhere across the globe, from New York to Johannesburg; he's performed at Comedy Festivals around the world, and has been a successful touring Artiste in the UK for the past 2 years. Truly cemented as a stand-up elite, he tackle's his biggest audience to date this year, earning a coveted place on the prestigious Channel 4 Comedy Gala at the O2 Arena in London in a stellar show in aid of Great Ormond Street Hospital joining the likes of Lee Evans, Alan Carr, and Michael Mcintyre in a stand-up extravaganza.