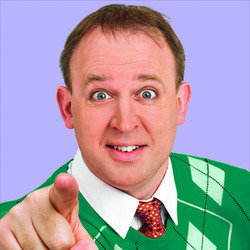 The 2011-12 sell-out show returns! 'The man's a marvel' ***** (Scotsman). Everyone has a story to tell. Come and see a totally ridiculous hour packed with Tim's silly jokes and the guests' unforgettable anecdotes. One by one the gifted storytellers step out of the crowd and into the spotlight. Sit back and watch Vine spin comedy silver from tales like I Accidentally Ate a Sparrow, My Next Door Neighbour Painted Me Green and There Was a Train Driver in My Loft. www.timvine.com

Don't panic, it's back! After a total sell-out and rave reviews at the last two Edinburgh Festivals, and on UK tour, The Tim Vine Chat Show returns to the world-famous Pleasance Cabaret bar throughout August.

Expect the pun-expected as the 'King of the One Liners' chats to his guests, freshly plucked from the audience, making each show a totally unique experience time and after time. Tim says: 'everyone has a story', it could be Roger from the hardware store, or Barbara the housewife from Durham. Actual people are the stars of the shows and Tim interviews them all with childlike enthusiasm.