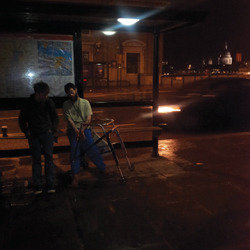 In the early morning they wake. Tired. The sun is gone and the road wet. 'Are we still stand-up comedians?' Tim Renkow asks. The buzzards circle overheard. There is nothing to do but walk. 'It feels like it,' Dave Millett replies. 'Well then let's do what we do best. Meander with purpose'. So it is morning to sunrise with Tim Renkow and Dave Millett, North American upstart comics returning to their colonial Mother England. The way is uncertain and the path steep, but they want their reparations. www.pay-what-you-want.info