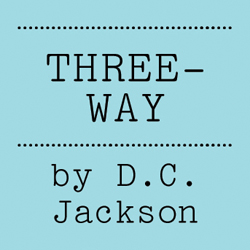 Julie and Andrew are a young Glaswegian couple looking to initiate a new moment of sexual adventure. The arrival of Mark represents exactly that, as the three engage in a pivotal tryst that offers more than any of them bargained for. As the characters wake on the morning after their sexual liaison, Threeway becomes a riotous body-swap comedy, tackling issues of race, social and sexual politics, and primal human curiosity.

Daniel C. Jackson is a young Glasgow-based writer. His first full-length play The Wall (Borderline Theatre Company) premiered at the Tron Theatre in 2008, and he received a Best New Play nomination at that year's Critics' Awards for Theatre in Scotland. DC won a Fringe First in 2010 for My Romantic History (Bush Theatre/Sheffield Theatres in association with Birmingham Rep), which was adapted for BBC Radio 4.

In 2012, Jackson's The Marriage of Figaro, premiered at the Royal Lyceum Theatre, Edinburgh, and he is currently under commission to write new plays for the National Theatre of Scotland. Jackson is also writing an episode for the third series of television comedy drama Fresh Meat (Channel 4).