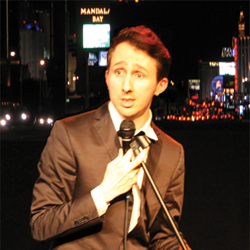 Different, top comedians every day in a cool, laid-back stand-up show with Rat Pack music, drinking, silliness and hopefully, you! Hosted by Malcolm Hardee Award nominee 2012 Nathan Cassidy, 'Gloriously entertaining' (Chortle.co.uk), in one of Edinburgh's most glamorous, big cabaret rooms. The Rat Pack comedians are suited and booted, all on stage for the duration, and ready to do something looser than their usual club set, creating a vibe reminiscent of a Vegas Rat Pack show. For clips and latest line-ups visit www.theratpack.co.uk.