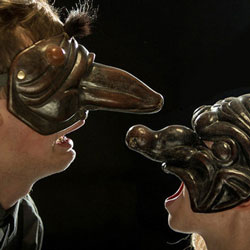 An award-winning piece of Commedia dell'Arte combining traditional masks, physicality and live music with a modern satire on the rise of the musical. West End wannabe Isabella, and theatrical impresario Senior Pantalone, are planning to stage The Prawn King - basically Macbeth set underwater with fishes. They're without a leading man but Pantalone's son, Cavalierie, is soon to return from university. Will Cavalierie agree to play MacPrawn despite his theatre phobia? Can Isabella's servant save the show from being panned? Will Disney sue over this thinly disguised satire of The Lion King? Hopefully two out of three. Staged by I Dilettanti.