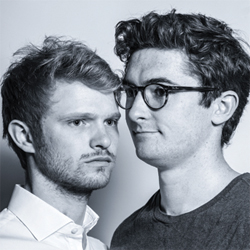 The Pin return to the Fringe, following last year's total sell-out run, with their best sketches yet. This is going to be big. As seen on BBC3 and ITV. Book now. 'Heavily tipped for future stardom' (Guardian). ***** (Skinny, ThreeWeeks). **** (List, BroadwayBaby.com, Scotsgay.co.uk).

The Pin return to Edinburgh with their unique brand of razor sharp sketches and double-act nonsense. Having been refined to a two-man act, Ben Ashenden and Alexander Owen are back, armed with a 'Best Show' award from London's inaugural Sketch Festival (judges included The Scotsman's Kate Copstick, Julian Hall from The Independent and Paul Fleckney from London is Funny).

The show is driven by the onstage relationship and chemistry of the two members, who present a variety of sketches, set-pieces, lectures and powerpoint presentations over the course of a finely-honed hour. The fractious relationship of their personas escalates to a wildly silly and anarchic finale, in which a business proposal Alex has placed all The Pin's hopes on goes disastrously wrong.

The Pin have performed extensively at a wide variety of venues around London, including regular slots at The Invisible Dot in Kings Cross, hosting their own night at the Leicester Square Theatre, Up the Creek in Greenwich, and festivals such as Lounge on the Farm in Canterbury.