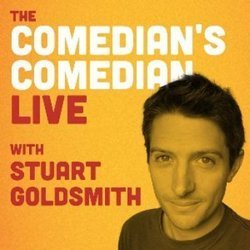 Stuart Goldsmith is the stand-up turned interviewer in this live version of the popular and highly respected podcast. The Comedian's Comedian Live with Stuart Goldsmith is having its first full run at this year's Edinburgh Festival Fringe from 1st - 26th August in The Billiard Room at the Gilded Balloon.

Described as comedy's answer to Inside The Actors studio, Stuart conducts insightful and in-depth interviews with comedy's most respected names, charting the journey of their unique ideas from head to page to stage.

The show is for anyone who loves comedy, makes comedy, writes comedy, or just has an interest in how some of the world's finest comedians create funny stuff. Launched in 2012, the podcast has established a strong online following, with key interviews generating tens of thousands of listeners. Guests have ranged from television names such as Alan Davies & Rhod Gilbert, to festival favourites including Dr Brown & Pappy's, and international artists such as Jim Jefferies & Hannibal Buress.

Already confirmed for 2013's Edinburgh run are Sarah Millican, Jason Manford, Brendan Burns, Andrew Maxwell, Susan Calman and Marcus Brigstocke, with an ever increasing variety of established and diverse talent being added to the list.

Stuart himself is a seasoned regular on the UK & international comedy stage. Starting his career as a street performer Stuart has gone on to appear all over the world, performing solo hours at international festivals including Edinburgh, Melbourne & Adelaide, and last year winning a Malcolm Hardee Award for his show Prick.