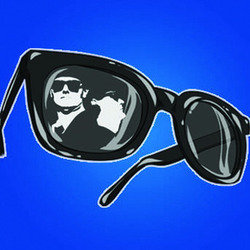 Hit show rolls back into town. Blues-driven rock'n'roll party guaranteed to get you up on your feet. Now celebrating its fifth year at the Fringe, this crowd-pleasing five-star production sees Jake and Elwood playing to packed house, so why not shake your tail feather over and see what all the fuss is about? Hold onto your shades! 'Warning: this show will put you in a permanent state of happiness, fill your head with music and make you want to dance all night long. It is quite simply unmissable.' ***** (BroadwayBaby.com). Early booking recommended.

FREE DRINKS OFFER TO THE FIRST TEN THROUGH THE DOOR IN FANCY DRESS.

Backed by one of the tightest rhythm and blues bands in the city, Jake and Elwood are still on a mission from God, so get ready to shake your tail feather this August at what Broadway Baby described as 'the best party of the Fringe'.

Following a successful West End run, the intensely popular A Tribute to the Blues Brothers - Live returns to the Edinburgh Festival Fringe for the fourth year. Returning with an all new cast, there will be plenty of new surprises from this high energy, multiple five-star show.

Louis Hartshorn and Brian Hook have established a name for themselves as some of the most exciting live music entertainment producers in the UK. Following the huge success of their West End production of Woody Sez (The Life and Music of Woody Guthrie) last year, they are returning to the Fringe for the sixth time with their ever popular Blues Brothers - Live and Rat Pack - Live shows.

The team is proud to present this work with kind permission from Daniel Ackroyd and Judith Belushi.