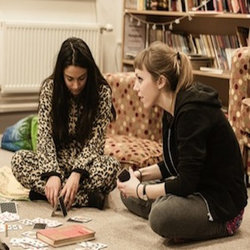 Sara and Jay are finding a babysitter for Ri, their unique young daughter. They've invited their favourite applicant, Aaron, round to look after Ri for the evening. It's all going perfectly for everyone, Aaron's a shoe-in for the job. That is, until Nikki comes downstairs... InDepth bring you an outrageous new family comedy with a lot of laughs and a big heart. Winner of four awards at the National Student Drama Festival: Festgoers Award, Sunday Times Playwrighting Award, Directors Guild Award, Commendation for Acting Ensemble. It's not politics, it's warfare and she started it!