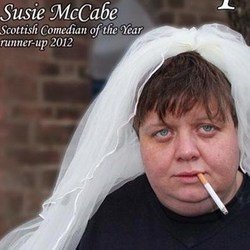 Irradiated an uncompromising no-bullshit attitude, playing very well with the Glasgow crowd ... [she has] a nicely dismissive approach to all the rigmarole her forthcoming civil partnership will involve, undercutting the audience's support of the nuptials, and elsewhere she was similarly contemptuous of pretty much anything that involves any effort on her part. More of this to match her strong persona ... could make her a force to be reckoned with' (Chortle.co.uk). 'The deadpan, self-deprecating, but wonderfully witty Susie McCabe' (Festival Journal).