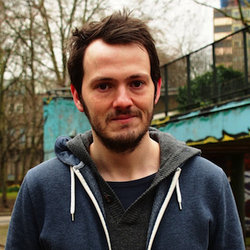 Following a great festival debut headlining 2011's It's Two O'clock Live at Two O'clock with a set described by critics as 'impulsive', 'original' and 'one to watch' - Stuart Laws returns to the fringe with his much anticipated debut show: Stuart Laws absolutely will not stop, ever, until you are dead (1hr show)

29 year-old Stuart is trying to embrace the fact that his attempts to blend in with the crowd have worked all too successfully and he is now a perpetual "omega male" or "little spoon".

Stuart is a comedian, actor, director and writer, creating great new comedy with great new comics. He started performing as a stand-up in 2007 and is now an established regular on the circuit.

Fresh from a successful year where he has supported James Acaster on tour, compered festivals for PLEB and debuted at Machynlleth Comedy Festival he is now ready to present his debut show to Edinburgh.

As one of the best shows on at the Free Fringe, there is no reason not to see this show. He is most well known for his online comedy directing, writing and performing with Turtle Canyon Comedy: racking up half a million hits in the past year and working with some of the most exciting names in the industry.

His most recent short film, Chubby Bunny, played at festivals around the world, including the London Short Film Festival and winning the runners up prize in Seattle. He has combined his love of film, acting and writing to create a debut show that is different, friendly and very funny.