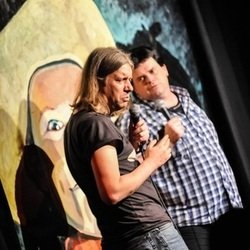 Stu Murphy and Garry Dobson perform all year round as Stand Comedy Club residents. Locals and Fringe regulars alike know exactly how good this five-star show is, as do the reviewers... ThreeWeeks Editor's Choice Award Winner 2010. 'Freestyle laughter gurus' (List ). 'Goes down a storm' (Scotsman). 'Achingly funny' (Evening News). 'If you're just visiting Scotland for the Fringe, you must see Stu and Garry. But don't try to take them home with you. They're ours.' (Skinny).