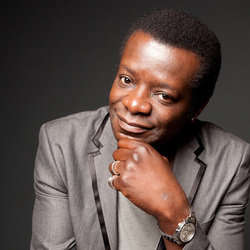 Work in progress from maestro of feel-good comedy. Fresh from sell-out tours of Australia and New Zealand, heard on BBC Radio 4 Life: An Idiot's Guide. 'It was all fabulous. But it was when riffing with the audience that Amos truly excelled. With a packed venue ready on his side, Amos drew people into his routines; his finely honed sensibility turned innocent remarks into comedy gold' (Herald Sun). 'Warmest comic around, able to riff off a crowd and make them feel good about themselves' (Sunday Times). 'Uplifting stand-up from a charming performer' (Time Out).

Fresh from sell-out tours of Australia and New Zealand, as well as winning The Critics Award at the Perth International Festival, Stephen K Amos is back at this year's Edinburgh Festival with his Work In Progress show.