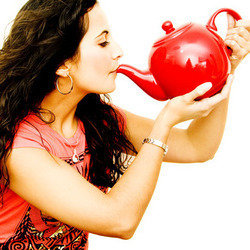 Stella Graham's hilarious journey from Coventry to Los Angeles, Thailand, New Zealand, Brazil and beyond. No passport needed. **** (FringeGuru.com). 'If you're a TV executive, drop what you're doing and go see her now' (Skinny). 'Fun and original ... everything a good comedian should be: self-assured, likeable and, crucially, funny' (BroadwayBaby.com). 'She's also got a terrifically funny way with one-liners, as they subverted expectations and delivered punch lines which were squarely at your sides.' (TVNZ). 'Laugh-a-minute' (FringeBenefits.com, Adelaide Fringe).

Cool, refreshing and makes a crazy night. Just some of the ways to describe Stella Graham.

Stella returns to Edinburgh with her hilarious new show, A Pint of Stella. Shameless, honest and delightfully inappropriate, it is the eagerly awaited follow up to last year's successful debut show Karma Comedian.

Her first Edinburgh show invited the audience to decide if Stella was good natured or devilish. A Pint of Stella shows how growing up as a half Sri Lankan tomboy from Coventry was never going to be easy, with fight-inducing bad haircuts, the joys of amusement arcades, having an overbearing mother and the perils of trying to teach Hollywood children to play football. Experimenting with fire, colonic irrigations and knowing when to keep your mouth shut in Thailand.

ince her comedy debut in 2008, audiences in the UK, USA, New Zealand and Australia have indulged in sparkling wit and ballsy comedy from a charismatic, unladylike daughter of a Yorkshire woman.

Stella was nominated for Best Newcomer at the 2009 New Zealand Comedy Guild Awards and has performed at the NZ International Comedy Festival, Brighton, Adelaide and Edinburgh Fringe. She writes comedy for NZ TV3 panel show 7 Days, has worked on screen for NZ's Juice TV, on-air for radio in England and NZ as well as making a podcast called The Comedy Hangover.

Stella, true to her name, is a star. With attractive looks and dazzling humour, she's ready to rock Edinburgh.