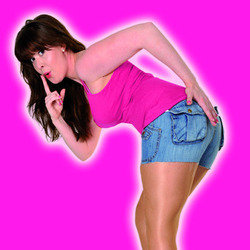 Age 18+. The show features themes of an adult nature, strong language and nudity.

Spank! returns for an incredible 10th year with sexy hosts, awesome comedians and the inevitable gratuitous nudity. With the most exciting comedy and cabaret talent on the Fringe, don't miss 'the Best Wild Night Out' (Scotland on Sunday) at the festival! Spank! You love it! 'This is what the festival should be about' (List). 'Legendary party night ... get down there right away!' (Time Out). Previous acts include Rhys Darby, Jack Whitehall, Josh Widdicombe, Chris Ramsay, Michael Winslow and Adam Hills.

Spank's original hosts James & Leon go out with a bang as they launch a competition to find their successors...

The Prize: Host one of the most notorious events of Fringe 2014.

Spank! You love it! Back again for an incredible 10th year with sexy hosts, awesome comedians, controlled anarchy and the inevitable gratuitous nudity; you know the score.

But as this year is Spank's 10th birthday at the Edinburgh Festival Fringe, something rather unexpected is afoot.

James Wren and Leon Fleury are hosting one last glorious bout of naked promos, boozy comedy and double entendres, bringing their stellar five star sell-out night of comedy mayhem back for one final storming year before they pass the baton on to new Spank! hosts for 2014.

This year the dynamic duo are seeking their successors, who will be paid to take over one of the most riotous and fun nights of the festival.

But what kind of comic is up for the job of hosting the most riotous night of the fringe? Who can hope to match James and Leon in being able to make 'em laugh, make 'em cry, calm 'em down, shut 'em up, bring 'em back onside and make 'em laugh again?

Hopefuls who dream of commanding the late night audience of misfits all screaming "you love it" at the top of their lungs, sometimes while naked, always while drunk, should go to http://www.spankcomedy.com for details of how to apply.

Spank! is hosted every night at midnight at the Underbelly on Cowgate and three Spanktaculars are in Underbelly Bristo Square on 10th, 17th and 24th August.