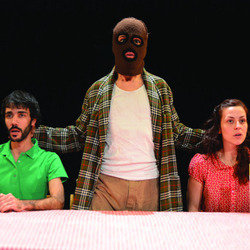 First Prize and Audience Prize BE Festival. What happens when your fear comes round for dinner, and your deepest, darkest thoughts refuse to lie low? Solfatara - a term for the openings in volcanic terrain, which emit hot gases high in sulphur. We are full of these geographical phenomena: orifices that allow our insides to come to the surface. A relentlessly inventive and hilarious play from catalan company ATRESBANDES that brought the house down at BE 2012. 'Uproariously rude and discomfiting.' (Donald Hutera, Times). Performed in Spanish with English subtitles. atresbandes.com, @ATRESBANDES