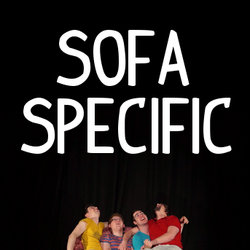 Four guys squeeze onto a two-seater to fabricate hilarious scenarios from pure imagination and removable cushions. Join us for an original hour of wordless comedy set on, around and in our much loved sofa. Mixing high-energy physical comedy and modern clowning, Sofa Specific is an endearing display of inventive buffoonery and eccentric entertainment. Stuffed with more ideas than Ikea; this is a unit that won't be put in the corner. Sofa Specific is a frantic play-filled hour with four performers, one sofa and no words. Suitable for all.