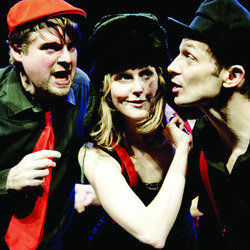 Improv / music performed on the following days in August 2013...

Brilliant, family friendly, musical comedy improvisation based on audience ideas! Spirit of the Fringe Award winner. 'Not only is each performance achingly funny, it's a genuinely new musical every time. Top class creativity in action' ***** (Time Out). 'A blast. Makes your jaw drop in impressed amazement and your ribs ache with laughter' ***** (Mail on Sunday). 'Spontaneous and hilarious. Awe-inspiring' ***** (WhatsOnStage.com). 'See them again and again and again' ***** (BritishTheatreGuide.info). Also, grown-ups shouldn't miss The Showstoppers' Improvised Musical, same venue 10.30pm. www.theshowstoppers.org

The Showstoppers' Improvised Musical will perform daily their regular award-winning new musical show - a comedy created from scratch at each performance. Audience suggestions spontaneously become an all-singing, all-dancing show on the spot, with unpredictable and hilarious results. This is their sixth year performing at the Edinburgh Festival Fringe. The Showstoppers will also perform, for one night only, a Twitter improv musical on 7th August, this is the first of its kind in the UK and possibly the world. They will create a fully-fledged musical on the fly mixing the suggestions of a live audience with tweets sent from their fans from around the world. The show has played sell-out seasons in London's West End, has been a must-see staple of the Edinburgh Fringe for five years, delighted audiences on tour around the world and has had its own BBC Radio 4 series.