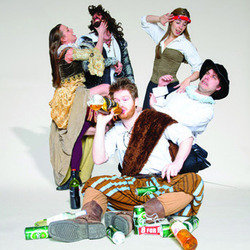 An entirely serious Shakespeare play - with an entirely shit-faced actor... Back for yet another year, the legendary Magnificent Bastard Productions stagger up to Edinburgh with the most raucous Shakespearian performance you'll ever see! Grab your mates, get your round sorted, and sit back to watch this finely crafted chaos. Surely the Globe saw some scenes like this back in the day - or did it? 'Genuinely hilarious' (Guardian). 'Very rock'n'roll' (Times). 'Hilarious' (Express). 'Extremely entertaining' (Scotsman). 'Is this a stagger I see before me?' (Sun). 'Majestic!' (List). Warning: do not try this at home. Book early.

Shit-Faced Shakespeare by Magnificent Bastard Productions is an entirely serious production of Much Ado about Nothing with the addition of an entirely shit-faced cast member. Hilarious, raucous and completely interactive, the show has entertained thousands of music festival goers since 2010, completed a sell-out run at the Edinburgh Fringe Festival in 2012 and nominated for best comedy show at this year's Brighton Fringe Festival.

'A high concept show if ever there was one' - Lyn Gardner

With a genuinely drunken professional actor selected at random every night, no two productions are ever the same. The energy and danger of the show are further compounded by allowing the audience control of when, what and how much the actor drinks during the show. Previous productions have featured highlights such as partial male nudity, Ill-fated crowd surfing, transvestitism, simulated sex acts, unconsciousness, partial female nudity, Justin Timberlake impressions, actual acts of a sexual nature and 'battle yodelling'. All presented within the confines of one of the finest works in the literary canon.

Shit-Faced Shakespeare seeks to introduce a new generation of theatre-goers to the works of the Bard of Avon in the manner we are convinced it was originally intended to be presented. As the entirely sober and highly talented cast desperately attempt to tell the story around the drunk. Uncensored, explicit and frequently out of control this is Shakespeare as the Bard himself would recognise it... probably.