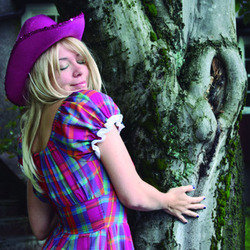 Singing her special brand of crass and absurd c*untry music, Shirley Gnome belts out original tunes about the embarrassing, hilarious, and titillating adventures of bodies colliding. Her songs are smothered in explicit language and racy humour, but sung with the voice of an angel dry-humping a cloud. Sometimes tongue-in-cheek, other times insightful and honest, Shirley weaves a live show that has people in hysterics - often in spite of themselves. Winner of The People's Champ of Comedy 2012, Canada's largest cash prize ($20,000) comedy competition.