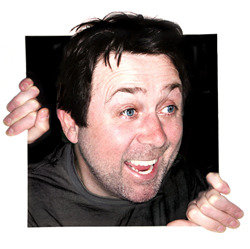 Following on from last year's hit show, Sean is back with another gem. This year he asks is a man the sum of his parts? Tackling all nature of human failings and foibles he takes you on a whirlwind hour that includes older brothers, The Human League and an Italian hooligan. Watch as they all combine to mesmerising effect. 'Master of satire and invention' **** (Evening Standard). 'Very funny, very human' **** (Times).

Award winning comedian, Sean Hughes returns to The Edinburgh Festival Fringe with a brand new gem of a show Penguins. Performing at The Gilded Balloon from 31st July - 26th August.

In this uplifting but reflective piece Sean asks the question, what shapes a man's life? Along the journey a career guidance teacher, an angry monk and an overexcited Nigerian help him find out. Penguins takes the audience on a whirlwind hour of abstract humour. Always guaranteed to make audiences feel better about themselves. Penguins is a total joy.

In a rich vein of form this is the follow up to one of the hits of 2012 Life Becomes Noises.