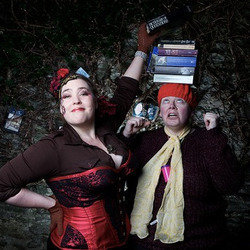 Scary Little Girls / PBH's Free Fringe - Join Monika de Plume (glamour puss, academic, thespian) and her assistant Non (dog's body, ensemble cast, backstage crew), for a romp round the nation's favourite literary sisters! A mixture of comedy and music, 'works billiantly on every level!' (Brighton Fringe). Be you a Bronte buff or theatre fan, we invite you for wuthering delights at the show that is the anarchic love child of French and Saunders and Hinge and Brackett! 'Everyone's talking about Scary Little Girls - are they worth the hype? Yes!' (Independent).