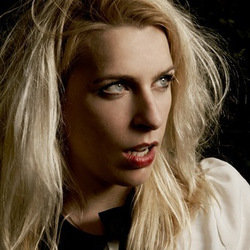 Nothing in life is certain. Everything we believe is subjective. Evidence can be manipulated by predispositions and prejudices. You could just be a brain in a lab being stimulated by electrical impulses. Or, if each cell in your body is replaced over time, maybe you are not even you anymore, like the Sugababes. Sara has starred on BBC Live at the Apollo, C4 Stand Up for the Week and Live at the Comedy Store on Comedy Central. Despite all this, she cannot be absolutely sure that she exists. 'Always clever, occasionally exquisite' (Independent).

Star of Twenty Twelve (BBC Two), The Thick of It (BBC Two), The Increasingly Poor Decisions of Todd Margaret (IFC) and Being Human (BBC Three) Sara Pascoe returns to the Edinburgh Fringe with her brand new show, Sara Pascoe vs The Truth.

Nothing in life is certain. Everything we believe is subjective. Evidence can be manipulated by predispositions and prejudices. Maybe you're just a brain in a lab being stimulated by electrical impulses. Or, if every cell in your body is replaced every year, maybe you're not even you anymore, like the Sugababes. Sara believes she is immortal and can control the universe. She uses to believe that a boy called Abbas from year 8 could see her through her cat. In Sara Pascoe Vs The Truth, she will explore all of the above, and try to make it funny.

Sara made her comedy debut in 2007 and has since established herself as one of the most interesting and original comics around. Her debut show, Sara Pascoe vs Her Ego, was a sell-out, critically acclaimed hit, as were her follows ups in 2011 and 2012, Sara Pascoe vs The Apocalypse and Sara Pascoe: The Musical respectively, and Sara was duly named by Time Out as one of the 'Rising Stars of Comedy'.

She boasts an impressive array of TV credits including regular roles in the BAFTA nominated Twenty Twelve (BBC Two), Campus (Channel 4), Free Agents (Channel 4), FIT (CBBC) and The Increasingly Poor Decisions of Todd Margaret (Channel 4), and has played guest leads in the BAFTA winning comedy The Thick of It (BBC Two) and Being Human (BBC Three). She was also a series regular on Stand Up For The Week (Channel 4), and has appeared on Live at the Apollo (BBC One), QI (BBC Two), The Comedy World Cup (Channel 4) and Don't Sit in The Front Row (Sky Atlantic). Sara will also appear in Robert Khan and Tom Salinsky's Making News at the Fringe alongside Phill Jupitus and Hal Cruttenden.