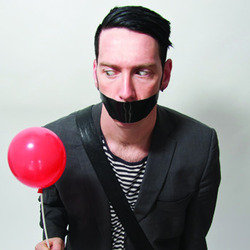 Boasting a unique blend of stand-up comedy, vaudeville and puppetry, The Boy With Tape On His Face was the runaway hit of the Edinburgh Fringe Festival in 2012, 2011 and 2010. He has since completed a phenomenally successful 22 date West End run at The Duchess Theatre. He now returns to Edinburgh for the whole month for the second year running to the prestigious Pleasance Grand - offering the very last chance to see his critically acclaimed show The Boy With Tape On His Face: More Tape. This is an unprecedented step for any act - two years in such a huge venue performing exactly the same show.

After appearances at the Royal Variety Performance, BBC Comedy Proms with Tim Minchin at the Royal Albert Hall and on ITV's Comedy Rocks with Jason Manford it would appear the sky is the limit for this utterly unique comedy phenomenon.

The brainchild of New Zealand stand-up Sam Wills, The Boy appeals to audiences of all ages - this charming character opens up a world of beguiling silent comedy, hilarious puppetry, willing audience participation & the undeniable power of gaffer-tape. The silent world inherent in Wills' shows is perfect antidote to the plethora of motor mouth comics who tend to dominate the circuit. Non-stop talking was in fact how Wills started out; a successful stand-up and street performer, his comedy was already getting attention before he came up with The Boy, mainly to challenge himself to stage a show without words. What started as a challenge quickly grew into a global phenomenon, leading to awards, stellar reviews, sell-out tours in the UK and New Zealand, high profile television appearances and even a video game & pilot for the BBC. His debut show scooped myriad five star reviews and an Edinburgh Comedy Award nomination for best newcomer international tour of the UK, Ireland, Europe & South Africa was an instant sell out.

Beautiful, uplifting and uniquely hilarious, The Boy With Tape On His Face harks back to an innocent bygone era, yet remains totally of its time and one of the most strikingly original shows out there. Mime with noise, stand-up without the words, drama with no acting. This show speaks for itself.