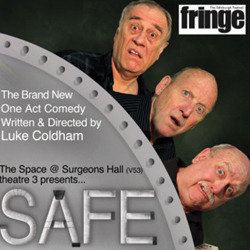 Safe written and directed by Luke Coldham. Tom, Dick and Harry have decided to wing their last bank job, only to lock themselves in the vault. Tom with bi-polar, Dick with his imaginary friend and Harry with his split personality all work together to survive the manic hysterical chaos that is the drive of this one-hour new piece of comedy writing. Written by last year's Edinburgh Fringe Festival Newsrevue performer Luke Coldham, Safe is definitely one not to miss for those who want a crazy evening of comedy.