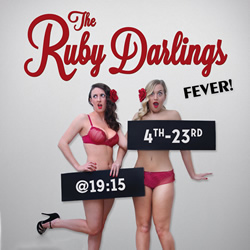 Performers Lily Phillips and Rachel Le Moeligou perform the world premiere of Fever! a hilarious and darkly comic account of life as a dancer. From failed forms of seduction, fit dads, sexual humiliation and lonely hearts The Ruby Darlings take you on a journey of hilarious encounters culminating in a raunch-tastic expose of life with a vagina. Written by the Company with composition by David Tims.

In the dressing room of a sweaty pub two cabaret girls will let you in on their deepest and darkest secrets. It's time to have your thighs stroked, your ears tickled and your larynges well and truly exhausted by the beautiful, the intelligent, the filthy - The Ruby Darlings.