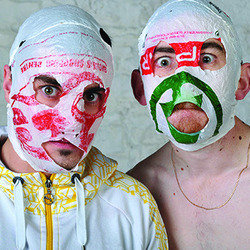 Music / stand-up performed on the following days in August 2013...

Fresh from a sold-out London season these Irish chart-topping bagheads return with the show that won a Chortle Award and 2012's Malcolm Hardee Award for Comic Originality.

Expect wild and outrageous antics at the funniest, filthiest comedy rave in Fringe history. Their riotous, satirical hit single Horse Outside became a global 10 million hit YouTube sensation with follow ups I Wanna Fight Your Father, Spastic Hawk and Blackman showing that these boys were no one trick ponies. With sold-out shows from New York to Newcastle and a Chortle award under their belts, now these urban 'Hib-Hop' plastic-bag-heads from Limerick make their Fringe debut with the funniest, filthiest comedy rave in festival memory.

Rubberbandits began entertaining their school friends with recordings of prank phone calls, which soon became successful radio broadcasts. They caught the eye of Irish broadcaster RTE and when Horse Outside was aired on the channel, the video went global and was only narrowly beaten to the Christmas number one slot by the X-Factor single.

Rubberbandits (aka Blindboy Boat Club and Mr. Chrome) never show their faces in public always appearing with plastic shopping bags on their heads. Their outrageous live shows combine raved-up music, sketches and on-stage insanity. They are hard to define but Rubberbandits straddle the music and comedy worlds like ... well ... like their twitter handle states: "like the tortured breath of Bob Marley that bullies its way through the air and extinguishes the candles on Brendan Behan's birthday cake."