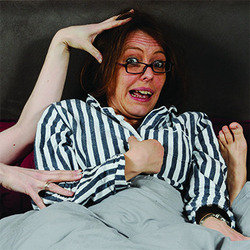 Prompted by a rash of monogamy bashing by high profile authors and thinkers (and an unlikely conversation about open relationships in Northampton) the Funny Women Finalist and Radio 4 regular has been tracking down sex researchers and polyamorous couples, and surveys Fringe-goers on their own fidelity, to explore age-old conflicts between lust and commitment - bumping into ex-partners and minor celebrities along the way - all to finally answer the question: is monogamy dead? 'Excellent and a bit posh' (Time Out). Fringe Report award-winner for her show The Science Of Sex.

Did you know that only a few dozen, out of the approximately 4000 mammal species on the planet, form anything like lifelong pair bonds? And that, according to recent statistics, as many as 60% of married men and 50% of women have had sex with someone other than their spouse whilst married?* But why haven't we talked about this? Until now...

Prompted by a rash of monogamy-bashing by high profile authors and thinkers including Alain de Botton, the breakdown of several close friends' long term partnerships and an unlikely conversation about open relationships in Northampton, comedian and disgruntled serial monogamist Rosie Wilby presents a loose sequel to her Fringe Report Award winning 2009/10 show The Science Of Sex (which she recently performed in New York) after making a pact with her best friend that they are going to become 'sex sirens' in their early 40s - whatever that means.

Rosie investigates age-old conflicts between freedom and commitment and between the pace of modern dating and the views of couples who have managed to stay together and goes in search of people who have chosen a polyamorous lifestyle with multiple partners. "There's some great language here" she laughs, "the term 'polysaturated' has been coined to describe reaching a threshold of as many partners as one can handle at a given time. Meanwhile a Male-Female couple seeking a mythical bisexual woman to complete their perfect fantasy triangle are known as 'unicorn hunters' in search of their 'Poly Grail'."

Rosie says: "I've started wondering if in order to be happy, human beings need both the loving security and companionship of a partner and the passion offered up by a lover. These two distinct sets of needs are rarely met by the same person at the same time. If we could ever establish a society where having one of each was the norm, then maybe we could eradicate the need for affairs entirely."

Funny Women Finalist 2006 Rosie has appeared on BBC Radio 4 Loose Ends, Midweek and Woman's Hour and at festivals including Glastonbury, Latitude and Green Man. Her writing has been published in The Sunday Times, The Guardian, The Independent, Time Out and more.