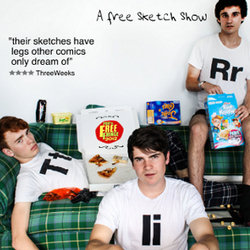 After failing to attract any serious media attention, confusingly-named trio Rory and Tim return with a new, commercially viable sketch show that would look really good on E4 or Sky or one of the other channels. In 2011, they brought you Free at Last and in 2012 Good for Nothing. Now they're scraping the bottom of the pun barrel with On the House. Nothing to do with houses. But it is free. And funny. 'Absolute genius and utterly hilarious' (ThreeWeeks). ***** 'Clever and witty' (EdFringeReview.com). **** 'Watch out for these young fellamelads!' (Londonisfunny.com)