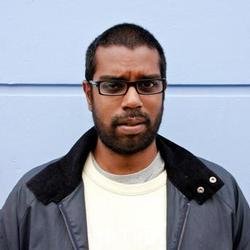 Romesh Ranganathan is trying to make sense of the world, but cannot make sense of his own house. Here he presents his struggle in an acerbic hour of razor sharp comedy - blending social commentary with personal tribulations. This show has already won Best Show at Dave's Leicester Comedy Festival. Come and see the comic fast becoming one of the most exciting acts on the circuit. As seen on Comedy Central at the Comedy Store (Comedy Central), Chris Ramsey's Edinburgh Fringe (BBC3) and winner of Leicester Mercury Comedian of the Year 2013. 'Extraordinarily hilarious' (ThreeWeeks).

Winner of the prestigious Leicester Mercury Comedian of the Year Award 2013, Romesh Ranganathan will make his debut at the Edinburgh Festival Fringe this year with his show Rom Com.

With his trademark acerbic wit and dry delivery, Romesh is trying to understand the world and has made the decision to start at a rudimentary level - his own house. Throughout this hilarious set, Romesh attempts to de-mystify the myth of the 'Rom Com,' after the credits have rolled. What really happens after the honeymoon period is over, and the patter of small feet resound?