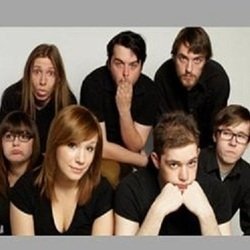 Rodney and Julie J: two household supermarkets, both alike in dignity and price, in fair common land where we lay our scene... Using physical theatre and a little blunt comedy, Romeo and Juliet gets turned on its head in this modern, hilarious interpretation. With no scenery or props, this piece is simply and cleverly staged with little more than the seven actors' bodies. Twisting the classic characters into new people, this is Shakespeare's classic tale of ill-fated love like you've never seen it before.