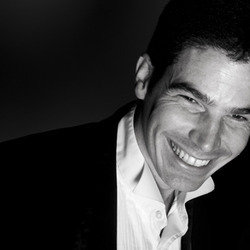 Rod Woodward has been having funny turns for a long time. Now they're happening daily, he needs urgent attention and laughter is the best medicine. '...laugh-out-loud funniness (Edinburgh Evening News). '...a young Dave Allen' (Peter Kay). 'He develops a real rapport with the room ... brilliantly pitched ... he got the whole room roaring' (Big Issue). 'A winning presence' (Daily Telegraph). 'A sure crowd pleaser' (Chortle.co.uk). 'Unadulterated comedy on a stick (Western Mail). 'A dazzling new comic with perfect timing' (Stage).

Laurie Mansfield Associates are pleased to announce the return of Comedian Rod Woodward to The Edinburgh Festival Fringe with a brand new show.

From the close knit "cwtchy" (as they say in Wales) village of Machen to the bright lights of the Festival Fringe... Quite a journey for Welsh comedian Rod Woodward. Mind you, he has no desire to forget his roots. Indeed the peculiarities his life in the Principality will pepper his new show. "There are quite a few parallels," explains Rod. "We have the annual famous Machen Festival which combines classical music with rubber duck racing, and our local pub the Dog Inn happens to be a very cosy intimate little place much like The Caves where I'm playing at the Fringe so I'm hoping I'll be right at home. And there's that age old Celtic affinity which I hope will help me to bond with the Scottish folk. Plus I'm a big porridge eater."

Woodward shares his brain droppings on such trending issues as Elvis and his postman, lip reading Babestation and preventing ginger nuts brainwashing other biscuits. He will also blow the cover on stiff bottom lips, touchy feelers, sentence finishers and the origins of dandelion and burdock (hopefully without offending any Irn Bru fans).

Rod hopes to emulate his hometown football team Cardiff City and their breakthrough to soccer's top flight this August by following them into the comedy premiership. The Welsh funnyman has been tipped for the big-time by Peter Kay, who described him as "a young Dave Allen."

The Cardiff-born stand-up comic has performed at Planet Hollywood in Las Vegas before Joe Calzaghe's super fight with Bernard Hopkins. His song 'Delilah - the Calzaghe remix' proved a big hit with Joe's army of fans.