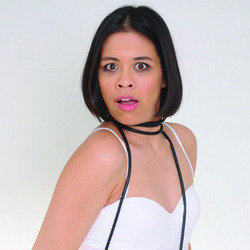 Award-winning comedian, Ria Lina, returns with her latest hour of stand-up and bawdy songs. Following a vicious online complaint that she made fun of special people Ria was compelled to defend herself by revealing her own previously unknown condition. As someone who is considered to be 'thpethial' she questions what does it mean, who does it apply to, and why isn't everybody? 'Engaging, endearing and eye-opening' (Time Out Cabaret, 2012). 'Fearless, provocative and very funny one-woman show' **** (Scotsman, 2012), ****(ThreeWeeks, 2012). Visit: http://rialina.com for more details.