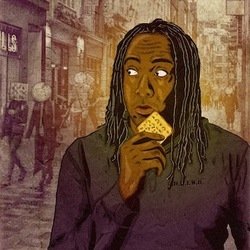 'Hunter joins the top rank of stand-up comedians working today ... comedy of rare scope' ***** (Times). In just over a decade Reginald D Hunter has become one of the UK's best-known and most distinctive performers. He is often brutally honest, frequently controversial but always meticulously measured and thought out. He returns this year with a brand new show following two sell-out tours and a successful debut live stand-up DVD. 'Sharp enough to burst balloons' (Independent). 'His presence and intelligence make him one of the most brilliantly unpredictable comics' (Sunday Times).

Following a Spring tour of the UK, a total sell-out season at The Edinburgh Festival Fringe 2012, and the release of his debut stand up DVD, Reginald D Hunter Live, Reginald returns to Edinburgh this year with his own unique blend of humour in a brand new show, Reginald D Hunter - In The Midst Of Crackers.

In just over a decade since he began performing, Reginald D Hunter has become one of the UK Comedy industry's best-known and most distinctive performers. His work is often brutally honest, frequently controversial but always meticulously measured and thought out.

Reginald's popularity has led to him being invited to perform in venues around the world in places such as Singapore, Hong Kong, Thailand, South Africa and The Sydney and Melbourne Comedy Festivals.

He is also a well-known face on primetime television shows such as 8 Out Of 10 Cats, Never Mind The Buzzcocks and QI and is a frequent guest on Have I Got News For You. He has recently appeared in Argumental for Dave Channel and Would I Lie To You? for BBC One. He also starred alongside Andy Hamilton in BBC Four's It's Only A Theory and appeared in the New Year's Day episode of the hugely popular Live At The Apollo (BBC One).

In November, 2011 Reginald released his highly popular debut DVD - Reginald D Hunter Live - which was one of the top sellers in the DVD comedy charts. This year he also toured Scandinavia and his tenth full-length Edinburgh Festival Fringe show, Reginald D Hunter: A Work in Progress... and Niggas sold out entirely with extra shows having to be added.