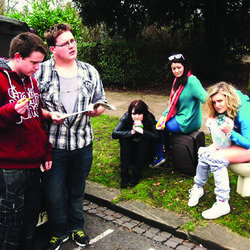 Have you ever been in a car? Then Recalculating is the show for you! BOMBSYTEtheatre took to the road and came back with Recalculating. John O'Groats to Lands' End: five people, six cases, one Peugeot, 2012 miles, seven days, seven destinations, flat tyres, fast food, toilet traumas! Wouldn't change a thing! Boom! Fasten your seat belts as we bring the people we met and places we saw to you. Come journey with us through the highs and lows as we go from end to end in Great Britain.