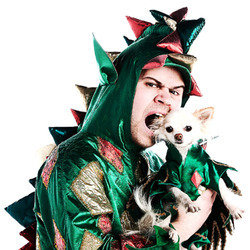 He's played Sydney Opera House. Toured with Mumford & Sons. Had over ten million hits on YouTube. And performed to over 200,000 people in a year. But enough about Mr Piffles - The World's First Conjuring Chihuahua. Piff's back too. With brand new tricks and a mind-reading fish, Edinburgh's favourite magical dragon returns. 'Hugely entertaining' **** (Time Out). 'Jaw-dropping' **** (List). 'One of the most magical things we've ever seen' (Penn & Teller). Nominated for the TO&ST award 2012.

Following previous sell-out shows in Edinburgh and London, Piff the Magic Dragon and his sidekick Mr Piffles, the World's First Magic Performing Chihuahua (TM), will once again dazzle audiences with their unique brand of deadpan humour and astonishing magic, playing at the Pleasance King Dome at the Edinburgh Festival Fringe from 1 - 25 August and at the Soho Theatre 14 - 26 October (tickets go on sale w/c 1 July).

With over 10 million YouTube hits to his name, Piff performed live to over 200,000 people in 2012, opening for Mumford & Sons on their 17-date UK tour, which included two major appearances at the O2. He can currently be seen gracing the cover of Babel, the band's second album, becoming the only magic performing dragon in the world to appear on the artwork of a Grammy award-winning album. A record Piff hopes to keep. Other international gigs included The Secret Policeman's Ball with The Muppets at Radio City Music Hall in NYC, and a hit nine night solo season at Sydney Opera House.

Piff is only the second magician ever to win both The Magic Circle Stage Magician of the Year (2013) and Close Up Magician of the Year (2011), and in 2013 he was promoted to Member of the Inner Magic Circle. This, the Society's highest Degree, is limited to a maximum of 300 Members at any time and is by call of The President. Current holders include David Copperfield, Paul Daniels and Lance Burton. Piff proved to be the stand out star of ITV1's Penn & Teller: Fool Us; Penn & Teller dubbed him 'a stunningly good magician' and the trick he performed in front of them was voted one of TV's 50 Greatest Magic Tricks.

Piff's alter-ego John van der Put is currently creating the magic for Punchdrunk's new show, The Drowned Man: A Hollywood Fable at the National Theatre. This is the second time he has worked for the ground breaking company, after he turned water into wine for Faust.

When asked what the audience could expect from the new show Piff said "I will be trying to break the ancient curse of the magic dragon, while Mr Piffles performs mathematics, translates French, demonstrates why his heart is heavier than stone and attempts to survive death by 14 razor sharp wooden spears. This year, we also have two guest stars: Darren Gold, The World's First Mind Reading Goldfish and Mr Fluffles, Mr Piffles' pet flea who will demonstrate his incredible strength of brawn and memory. Provided the environmental health agency don't make us de-flea him."