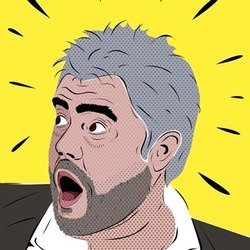 Phill Jupitus goes head to head with The Voice in this solo spin-off of Deborah Frances-White's Fringe hit. See the hidden depths of the human unconscious pushed beyond its hilarious, extraordinary limits. The hysterical, spontaneous mayhem of Voices just got even freakier.

Last year's hit show, Voices in Your Head, created by Deborah Frances-White and featuring a changing cast of some of the fringe's best comedy performers, returns to the Edinburgh Festival Fringe, Thursday - Saturday's only, from 1st - 24th August at The Pleasance Courtyard. Plus this year, a very special new show has spun from the original production. The Phill Jupitus Experiment sees Deborah's creation take on just one unsuspecting comedian and regular 'Voices' guest ... Phill Jupitus. This new show will see Phill face The Voice alone at The Pleasance Dome from 31st July - 26th August.

Voices in Your Head takes the UK's best stand up, sketch and character comedians and puts their brilliant minds in overdrive and challenges them to reveal more than ever before. They have no idea what they're doing until 'The Voice' inspires, cajoles and interrogates them. Catch these fantastic comics perform as you've never seen them before: uncensored, out of control and funnier than ever. Previous guests have included Hannibal Buress, Russell Tovey, Miles Jupp, Thom Tuck, Humphrey Ker, Sara Pascoe, Mike McShane, Pippa Evans, Andre Vincent, Felicity Ward and Kerry Howard.

Voices In Your Head: The Phill Jupitus Experiment sees the Never Mind The Buzzcocks star go head to head with 'The Voice' on a microphone who will interrogate, provoke and cajole him to create dark-hearted comedy mayhem. See the hidden depths of the human unconscious pushed to their illogical conclusions in this unforgettable, electrifying and hilarious show. Voices in Your Head just got even freakier.

Phill Jupitus joined BBC Two's pop quiz Never Mind The Buzzcocks in 1996 as a regular team captain. He also hosted his own show on BBC GLR, where he presented his own show from 1995 to 2000, and became the breakfast DJ on BBC 6 Music in 2002. As a standup, he has performed two UK tours: the Star-Wars-themed Jedi, Steady, Go in 1996, and Quadrophobia in 1999. Phil also supported Madness on their 2000 national tour, and starred in a sitcom called Dark Ages for Granada Television. In January 2000, he joined BBC One's comedy panel game It's Only TV But I Like It as a team captain, alongside Jonathan Ross and Julian Clary.

Deborah can be seen regularly as a stand-up comedian at festivals and in theatres. Her signature show How To Get Almost Anyone To Want To Sleep With You has been seen at the Edinburgh Fringe Festival, Latitude, Adelaide, Melbourne, New York and for two years at her regular monthly residency at London's Leicester Square Theatre. Deborah's other solo shows include Cult Following and Half a Can of Worms - the show about finding her biological family which she will present as one off performance at the Edinburgh Fringe this year. Deborah also works as a screen and TV writer. Deborah currently has commissions from Channel 4 and the BBC, as well as Redwave Films.

Phil and Deborah on BBC Breakfast