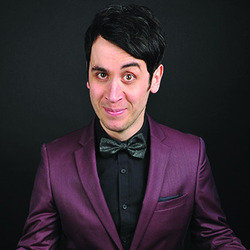 Prepare to be amazed and amused as 'the UK's leading comedy magician' (Time Out) returns to Edinburgh with an astonishing new show. As seen on BBC2's The Sarah Millican Television Programme, Channel 4's Mash-Up and star of BBC1's The Magicians. Part comedian, part magician, all scoundrel! 'The man from Middlesbrough sets the pace for comedy-meets-magic in the 21st century' (Times). 'The new poster-boy for British comedy magic' (Telegraph). 'Impressive, well-executed illusions delivered with the same speed and lightness of touch as his surgically-precise one-liners' (List).

Prepare to be amazed and amused as Pete Firman returns to the Edinburgh Festival Fringe, Pleasance Courtyard with an astonishing brand new show Scoundrel from 31st July - 25th August.

See Pete astound audiences with a vast array of new magic tricks and hilarious anecdotes in what promises to be an exciting fresh instalment from the UK's leading comedian magician.

Pete's skill for fusing magic and comedy has made him one of the most in demand magicians working on British television, he has appeared on various television shows, most recently starring in BBCOne's prime-time Saturday night programme The Magicians, BBC Two's The Sarah Millican Television Programme and The Channel 4 Mash-Up. He has also written and performed in television magic shows such as Monkey Magic (FIVE), Dirty Tricks and Derren Brown's 3D Magic Spectacular (Channel 4), The Secret World of Magic (Sky One). He has also made dozens of guest appearances on programmes like The One Show, BBC Breakfast, Comedy Rocks with Jason Manford, This Morning, Edinburgh Comedy Fest Live, Comedy Cuts, Saturday Live Again! and Something For the Weekend. He is also an accomplished television presenter, having fronted the game shows Stakeout and Wait For It for BBC One and The Body Shocking Show for E4.

As a writer, Pete's first book, Tricks To Freak Out Your Friends, a beginners magic book for the 21st century was so successful in the UK, it was also released in the USA and is about to go into its second print run.

Pete has performed seven years in a row at the Edinburgh Comedy Festival as well as the Just For Laughs Comedy Festival in Montreal, which is by invite only. He has toured the UK with four solo theatre shows, most recently Hoodwinker in 2013.