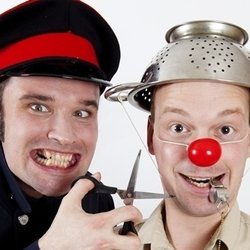 Dark and chaotic character comedy from the stars of Britain's most fictitious talent agency. 'Brilliant, inventive, far, far beyond silly with riotous audience interplay, one to watch' (TheLondonist.com). 'If you're looking for a little illicit, maybe masochistic thrill, keen to untether your mind from the logical world, hungry for an explosion of ideas, aching to unleash the manic laughs you stifle in your daily life - it might just be time to subject yourself to Pekka and Strangebone' (OnTheFringe.biz).

The show combines character comedy, clowning, stand-up, improvisation and audience interplay. The action is driven by the absurd and original material; the unpredictability of the audience participation; and the infectious enjoyment the performers take in their work.

Having had two successful runs at the Hen & Chickens and the Canal Cafe Theatre in London, as well as performances at Glastonbury 2013, the team are looking forward to making it a stand out show at this year's festival.

"Brilliant through and through. Inventive, far, far beyond silly, and with riotous audience interplay, they delivered fast-paced sketches, each more random than the last. Using the comedy staples of pie-throwing and its ilk, they mashed it up with cultural stereotypes that made you wonder what on earth could've inspired it. One to watch." The Londonist

"If you're looking for a little illicit, maybe masochistic thrill; keen to un-tether your mind from the logical world; hungry for an explosion of ideas; aching to unloose the manic laughs you stifle in your daily life - it might just be time to subject yourself to Pekka and Strangebone." On The Fringe

Neil Frost: Neil trained has trained in improvisation with David Shore aluumi of the legendary Second City Theatre in Toronto and in clowing with Mick Barnfather from Theatre de Complicte and Phil Burgers. He has appeared in the world's longest running comedy show Newsrevue at the Canal Café and in 2007 Neil toured India for 6 months as Sebastian in Twelfth Night. Neil currently works with Danish comedy troupe Café Kølbert, can be seen on-board the London Ghost Bus Tour and is one of the studio audience warm up comedians for Loose Women. Neil is a member of the Stopped Clock Theatre and appeared in Ed - The Musical (Musical Theatre Matters Award winner 2009). Other productions include Lucky Dip, Man Band, ASAP, Oblivion. Neil is also a long standing performer with the award winning Wireless Theatre Company.

Ben Whitehead: Actor, comedian, and voice-artist, Ben is lucky enough to have worked extensively with Aardman Animations since 2003 and can be heard playing the voice of Wallace in many recent Wallace & Gromit productions. He has been performing character comedy for several years, appearing on the London fringe, at Edinburgh and Glastonbury from 2009 - 2013. Ben was the creator and entrepreneur behind The Ghost Bus Tours in London. He is very proud of his work with The Wireless Theatre Company and can be heard on their website.

Dan Lees: Dan began performing comedy in 2008 as one half of the duo Moonfish Rhumba, who caused a stir with their own brand of obscure musical comedy madness. They were Hackney Empire New Act and Amused Moose Finalists and debuted their first sell out show at the Gilded Balloon in 2009. As a solo performer Dan was a Laughing Horse New Act semi-finalist and can be seen in various guises on London's alternative comedy and cabaret circuits. At last year's Edinburgh festival Dan appeared in and co-wrote the critically acclaimed show, Tom Cottles These Twisted Folk at the Underbelly. This year Dan will also be appearing in Lost in the Eighties, as part of Modern Dreams, eighties comeback sensations, who recently performed at the Udderbelly festival on London's Southbank in Forgery Club: Back to the Eighties.